Annual attempt to qualify for the Riverfest final, which this year is on the River Trent. The pools were paid directly to the Angling Trust, and Kev Dicks was the local organiser who had booked the Riverside pub at Saltford. The organisation was good, a bacon roll and cup of tea (after booking in with the pub) and then all stayed outdoors. Kev drew the pegs for everyone (bar himself and the two other helpers) and it was done in alphabetical order. I got given peg 46, which turned out to be permanent 104 , this is a peg in C zone which is in the trees and just to the right of the arch. It certainly isn’t a great peg or area, and rarely frames so it was a tough draw, I expected the end pegs to do well and maybe also the stream on peg 90.

The rain the day before had given the river a nice bit of colour and flow, and I thought this might encourage the skimmers / bream to feed, and so the section could be better than normal and I thought 20lb would be needed. 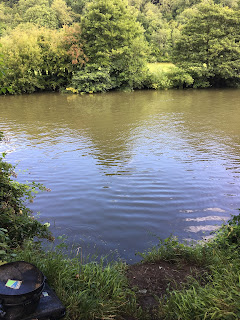 I was positive in my set up today, a 3g pole float with 18 N20 t0 0.11, and a 4g flat float with 16 N30 to 0.13. Only other thing was a feeder rod for groundbait feeder with 14 to 0.15.
The match started at 12:30, yes you read that right, the reason for the late start is it allows all of the rowers to clear off, and to be fair we didn’t see many if any after the start. I put some bait in on the feeder line with a big feeder, and then put 14 balls on the pole line which contained casters and hemp to start. I went straight in on the pole with a caster, but as ever I couldn’t get a bite on it, swapped to maggot and started to get bites, the fish though were small and all swingers, little roach, chublets, and poxy bleak. I kind of already knew I was struggling after an hour and I put some more balls in with worms and more casters. I started to catch a few better fish, but these were perch of 2oz to 3oz so not what you really want. Soon I had Dave Haines sat behind me watching, and we had a good chat as I struggled on, though I did get a chublet about 10oz on the pole while Dave was behind me. He said my neighbours Steve Vernon and Mark Brush were both struggling too. More info came up from Jerry Pocock, he said the anglers down at the end were all catching well on the pole and had 8lb+ at least.
I gave the feeder a go, but this was mainly a waste of time with just odd chublet taps. so I piled some more worm and caster in on this and came back in on the pole. I had a small hybrid of 6oz first drop and then a couple more chublets before the bites stopped again, more top ups on this line and back on the feeder. Whilst on the tip I saw a huge pike come out of the water, Dave didn’t see it but saw the huge boil on the water it left behind. Dave went off to watch someone catching better than me, and not long after he had gone the rod was nearly dragged in! I grabbed it and thought this must be a chub, but soon realised it was a pike. Whether it was the monster I had seen I do not know, but this was big and as they don’t count I pulled hard, then everything went slack, but the pike hadn’t broke me. It had actually bit right through the fish, never had the before, and here’s a picture of what I swung out lol, just the head with one eye missing. 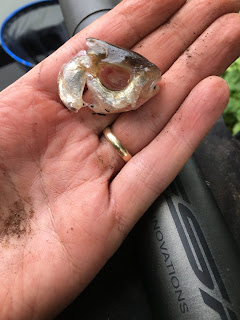 Back in on the pole trying my best to catch better fish, but they weren’t there, in fact reports were the river was fishing poor for bream and the bottom of my zone was the best place. I did have a good run of roach on the pole for an hour, they just turned up and were quite easy to catch, but not great in size. I then had a tangle on the rig, but got on with it and carried on catching until a jack pike struck and that was enough of that. Sat it out on the feeder till the end of the match hoping for a few pull rounds but it was not to be.
I decided to weigh in to see what I had, and the scales gave me 6lb 8oz, nowhere near enough but at least some roach seem to be showing now, and there are lots of chublets about. Steve DNW, and Mark Brush had 5lb 4oz, so not great but we all tried hard to catch elusive skimmers and bream. Though below Mark, Geraint Powell caught 2 skimmers and 2 chub in the last 40 minutes to add 7lb to his weight for a decent 11lb which would win him the ten peg section. 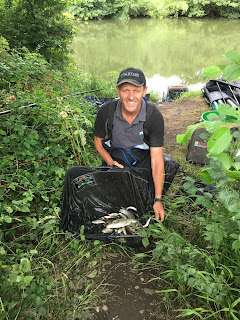 My zone was won by Paul Purchase who was 4 off the end peg, he had 20lb 8oz all on the pole, roach, chublets, and a few small skimmers, he also won the match with that weight, well done Paul. My zone below and you can see the weights were good at the bottom. 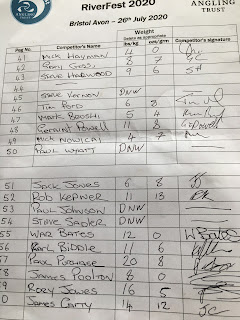 The other two anglers going through to the final were Rueben Guerra who was on end peg 1 and had 2 bream, chublets and roach on the pole for 16lb and won zone A (and came 2nd overall), and Kev Dicks who had 2 late bream on the feeder to go with some chublets and won B zone with 12lb. This was quite a shock as everyone expected this zone to be the best with bream showing, but they simply did not feed and most weights were poor. Anyway, well done to those three and I wish you all the best in the final.