Unusually for me a double header this weekend, with a riverfest qualifier on Newbridge next weekend I wanted to get on the river to get back in the groove. Kev Dicks advertised this match on facebook etc, but sadly only 8 people turned up, still it would do for me. My gear is still not with me and I have to make trips to my parents to get my gear. However, work has started on my house, with old falling down garage and shed pulled down, new surface laid, and now my workshop is being built. Fellow angler Ben Rendall is doing the job, with Kev Dicks and Warren Bates also assisting. This time next week I hope to have my gear with me again. 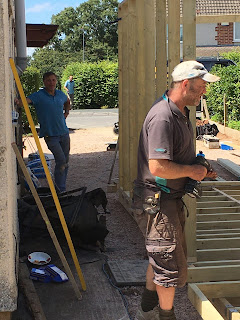 Back to the fishing, Kev ran the match on the same hours as riverfest is planned. 10 am draw fish 12 to 5pm. At the field the other anglers were, Ben Rendall, Jerry Pocock, Nigel Evans, Mike Martin-Davies, Andy Cranston, Mike Shellard  and Kev Dicks. Pools paid, draw done, and I was heading for peg 10 in the little field, with nobody below me I had plenty of room. Ben was above me on peg 7. It has been a while since I have fished 10, would have loved if the river had plenty of colour in it as bream are in the area, but sadly the river was pretty much stood on its head most of the time, and it was clear but not worryingly clear in my opinion. With no flow on the river I opted against setting up float rods, but did set up a feeder rod with 14 N50 to 0.13. Three pole rigs, a 1.5g pencil rig with 20 N40 to 0.09, 2g bodied float with 18 N40 to 0.10, and finally a 2g with 18 N20 to 0.13 for holding still. 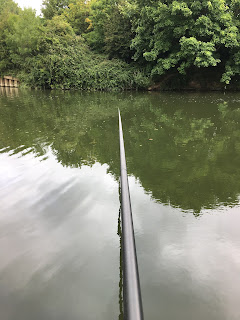 To begin the match I balled in 12 jaffas of my usual Sonubaits river, lake, bit of black roach and my faithful brown crumb. I went in using caster on the hook, but three run throughs were biteless then I had a bleak, errrr. Stuck a maggot on and had a dace, then a small roach. Things became difficult already and I had to pick up the pencil float as I was missing bites. It was better for a couple of roach and dace, but then tiny chublets and bleak became a real pain. Even with a bulk pushed down and droppers all next to the hook length it was hard to get past them, but occasionally I had a better fish. Things though got worse, the bleak went and so it seemed had everything else! 90 minutes in and I couldn’t get a bite, potting more bait in had no effect either. Perhaps some bream had moved in (I wish) so I dropped the feeder over the pole line, 30 minutes of nothing other than a 4oz roach. I tried the heavy pole rig with a worm on, and I was just about to give it up when I had a bite down the peg, turned out was a 1lb skimmer. No more followed.
Glenn Bailey rang me 2 1/2 hours into the match and I told him I was struggling with about 3lb. I was now in danger of losing faith, but I gave the pole / feeder line a rest and caught a few bleak at 7m where I had been feeding a few maggots, a few were there but after I caught about a dozen they weren’t happy. Team mate Geraint Powell had been sat behind me for a few minutes when I then went back on the feeder, I had 3 small perch in three casts on a worm and red maggot so at least some bites, and then it went quiet next cast, then the tip went round nice and steady and the rod hooped over. I had a bream on and it felt a good one, river bream always give a good account of themselves and so I was glad when this one went in the net, maybe 5lb. Where there’s one there’s more… not this time, the feeder line went real quiet after this. Geraint told me that Mike Martin-Davies had a bream and skimmer on peg 16, but not much else was caught at this stage.
I had a bit of a struggle until the last 40 mins really, Mike had 2 bream now and I thought I was a long way behind so stuck it out on the feeder and I had a skimmer of over a pound to renew my interest. Then a 8oz perch and then a perch of just under a pound in three casts. In the last 20 minutes I had a couple more bites and landed two eels, one had to be 1 1/2lb and was my last fish. As you can imagine they were all taken on worm hookbait, and it was nice to get a few species in the end. I thought I had 12 to 13lb. 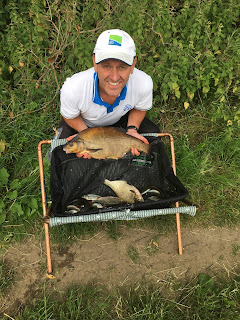 Weights as I know them..
Peg 1    Nigel Evans 10lb 2oz (a bream and a very big perch)
Peg 4    Jer Pocock 8lb (lots of small roach)
Peg 7    Ben Rendall 10lb 2oz (roach and chublets)
Peg 10  Tim Ford  14lb 12oz
Peg 16  Mike Martin-Davies 14lb 10oz  (sorry Mike!)
Peg 24  Mike Shellard think it was 23lb+ (4 bream + perch)
Peg 30  Andy Cranston just under 10lb of roach
Peg 34  Kev Dicks.. Not sure what Kev had but maybe 7lb
As you can see the old man himself Mike Shellard won, and I came 2nd which was worth £50. Compared to many places that was good fishing and some decent weights. I suppose it was mission accomplished as far as catching some fish and practicing, with roach not really playing ball a bonus or two will be needed in this zone next week.
Tomorrow I am on the superleague at Staverton, peg 31.
Written by
Tim Ford at 21:27