A number of lads, in particular John Smith asked where my boy friend was? Meaning of course Geoff Francis – “was he under the thumb”? I explained that for some while Geoff had been promising himself a van. So a week or so before the lock down he traded his car in. So the new purchase stood more or less idle for 3 months. It certainly didn’t have any fishing tackle in it, the reason for the purchased. Just as the lock down ended his neighbour bought a mobile home and drove it for the first time back to his home only to crash into Geoff’s van causing significant damage. So today it’s still in the repair shop and expected to be finished in two weeks time.  I’m sure we will see him out soon.

Arrived early and had a walk around to free up the back a bit. which is gradually getting better. The Pool looked dour with no signs of fish. A hard day in the offering, especially with 25 fishing, this match becoming ever popular being local for most.

A new attendee today – Mark Tanner. Unfortunately didn’t draw well and had a baptism of fire.

I will be glad when I can blame myself for the draws as I was given peg 33 which is the wrong end for me. However, on the positive it was an end peg and would be in the shade all day. Arrived at the peg to find the aerator running (pictured) which switched off at 09:00. Opposite I have returnee Kevin Winston (pictured).

Three rigs – Short Ronnie for caster over caster, a 4×16 to fish top-set plus three barrels with 4 mm expander over micro.and a margin paste rig.

I fed the long line which I started on with 4 mm expander whilst I loose fed caster on the Ronnie line. I had a run of small fish – Tench, Skimmers and Ronnie’s, but was missing bites from tiny Skimmers and Perch. The peg gradually faded so refed and tried the Ronnie rig. I had a good 15 minutes catching small Ronnie’s, Perch and Rudd quickly until it went quiet and soon had an F1. I switched to paste and had another six and a 6 lb Carp whilst still lightly feeding caster. I thought I was in for a good day until I hit the two hour mark and all seem to die. I went for a walk and sure enough everyone was struggling. Back eased so tried the long line again and had a 4 lb Carp. Tried the Ronnie rig this time with maggot and had a 1 lb Chub making six species in the Silvers net! Decided to sit the last three long hours out on the paste adding just one more F1 during which time rigor mortise had set in. 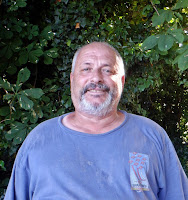 My Silvers weighed 6 lb 8 oz and my Carp 22 lb for a total of 28 lb 8 oz for a fourth overall pick up. A number of DNW’s down this end leading with suggestions that sections would be fairer especially as the number of anglers are increasing (pictured above – some anglers chewing the post match fat)The match and the Silvers was won by Paul Barnfield (pictured right) with 19 lb of Silvers and 24 lb 12 oz of Carp from peg 28. Paul caught all his fish on worm over micro at 13 metres. Well done on hard day.

The usual suspects plus three were all eager to get in the pub garden for our first after match pint since lock down – great end to the day. On the way home I could have been excused in my thinking the toure de Somerset had started.