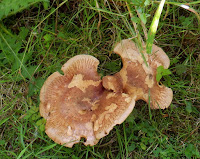 Hot day it was to be and was. Arrived early and walked around all three Lakes, they all looked dour especially Bridge Pool without any signs of feeding fish. On the walk I found this Fungi, I wish I knew more about such things – beautiful, in which case probably not edible.

I was hoping to be at the car park end as I have done my stint sitting in the the far end. Dave Gillard got the draw under way (

attached to the Drennan 25 elastic which I love fishing – Adrenalin rush. At last the all in and only fed the 0.5 g line with micro and went straight over it with paste and hooked a Carp which caught me by surprised taking me into the fish refuge losing the lot. These refuges are a hindrance to the fishing and provides limited protection from predators. The tiny Rudd like sitting on top of it though – not one of the better decisions and need taking out. Sounded like Tony was also battling with his refuge. New 0.5 rig setup and next put in another Carp of about 5 lb which I did get out – sad sight as it was very dark and blind. I persevered with this line but no more fish not even nibblers which was worrying. I started to feed the caster and with single caster on the Ronnie rig had one singe bite a large Perch which came off. I couldn’t even catch a Ronnie, so this was abandoned. I spent the rest on the match in the margin – first four put-ins accounted for four F1’s – blimey these fish are quick 0-60 in a millisecond. It slowed but kept adding the odd F1 and some better Carp. The bites had completely dried up and stay on this too long. It wasn’t until the last 15 minutes (though I had another 45 minutes) that I chanced going down towards the refuge and added another three F1’s before the all out. Should have kept a closer eye on the time. 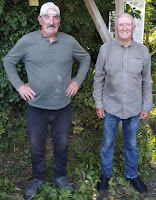 The Silvers was won by Dave Haines (
What glorious weather for a pint in the pub garden – now what happens in a pub garden stays in a pub garden – however, did you know Cliff spends a lot of time in Keynsham pubs. I know Geoff Grant would make a plump Rat but you won’t see one climb a drain pipe quicker. 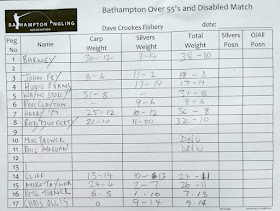 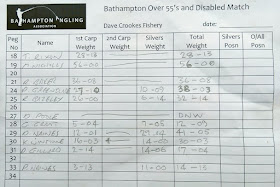