First to arrived, so walked the whole complex and couldn't help noticing a vast difference from last match with fish feeding everywhere. Got to Bridge Pool where the Carp were having a right munch, which also meant their Skimmer Groupies would be feeding near by. The most Carp activity was between pegs 11 and 27 so any of them would do today and I had decided to fish for Carp - unless. Met with Kev Winston and told him a ton was on the cards today.

Dave Gillard drew me peg 15. I had to think for a second where I was going as Iv'e not been on these pegs for a long time. Happy with this and even though it has some Silvers form decided to target the Carp short, which would benefit the pole fencing with peg 16. Great company again with Tony Rixon on peg 15 - he would target the Silvers for sure and at 90 degrees was Chris "Squeaky Roller" Ollis, who also had the Silvers in his sights.Set up the waggler for fishing to the island at 17 metres with maggot over maggot, two paste floats, both on the top-set one out in front in 6 foot of water, just up the shelf and the other for both margins at the same depth for paste over potted micro and loose fed 4's.

Started by feeding the RH margin and out in front with a pot of wetted micro and pulted a few LR's over on the waggler line. Started out in front with the paste expecting a quick Carp, but not only nibblers. So picked up the waggler and with single LR on the hook had a couple of Rudd then the micro Perch showed up and wasn't upset when for some unknown reason the sliding float link managed to come off the line - a bit line the ring and rope magic trick - must discuss this with Dave Willmott. So set it up again which proved unnecessary as I decided to try the RH margin and didn't get another cast. First try in the margin and a decent Carp in the net. By potting a few micros and loose feeding 4 to 6 hard 4's over the top (which amused Tony) I had a great run of quality Carp. In between I was catch their groupies - some decent accidental Skimmers to Chris's dismay. I waited until the last Carp o'clock hour before switching to the LH hand side and had another decent run of more quality Carp - very pretty fish.

My accidentals weighed 17 lb 8 oz and my Carp 118 lb 07 oz for a match winning total of 135 lb 15 oz - a marginal victory. Great days fishing for a number of reasons - one notable was getting cooled off by the rain.

The Silvers was won by Tony Rixon (pictured above with the match winner) with an excellent weight of 42 lb 1 oz from peg 15. See his blog for the details but what he won't mention was how well he fished both short shallow with caster but especially when he started at 17 metres for the F1's - class act not many anglers can do this, catch brambles and still get the F1's out! No Bramble gate today.Back to the pub with the usual suspects to end a day when the Pool fished very well. 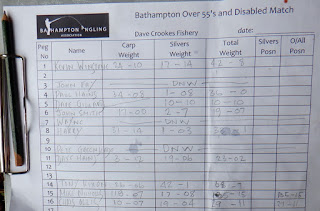 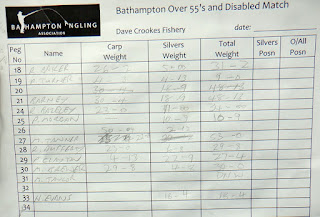