Had my usual walk around a flat calm Bridge Pool which which has been windless for some time which lead to think it wise to switch on the aeration. The water had once again gone clear. There seemed to be plenty of small Ronnie's topping on the bottom pegs which might be a way to pick up today especially  if they are the only fish to feed. The trees and shrubs are starting to show their autumn glory - pictured. However, without any sunshine it was to feel a bit nipply.A good turn out with 24 fishing. Dave picked my peg 25. This peg under Colin Golding leadership was one of regulars to go in and did produce some good Carp weight from the margins, but subsequently got left out because it was back in a bay and possibly affected peg 26 which nowadays is left out. For company I had Paul Barnfield on peg 24 and Tony Rixon on peg 27, so I knew I would be outgunned on the pole, so set up the waggler.

Whilst shotting up the waggler I cast out and once the waggler reached 12-o-clock a Seagull flew from behind me and into my line and as bad luck would have it the hook half hitched around it's leg and with some help from Tony (only after he videoed it) and Paul Clayton managed to land it and unhitch it. Luckily it flew off uninjured. If I was a seafarer I would consider this an unlucky omen!

With the water so clear I didn't think the Carp would come in to the margin, but still set up a 4x12 Speedy set to 3 1/2 foot to fish worm or a bunch of maggots. As per usual I set up the Ronnie rig and a 4 x16 Winter Titan to fish top-set plus three barrels which took me to full depth and level with Paul's platform!

I have a quick look on the Ronnie line with single caster which produced nothing, so out on the long line and missed a bite then foul hooked a Carp which was soon lost. After this I had a few micro Ronnie's, Skimmers and Perch whilst Paul Was bagging on decent Skimmers fishing 13 metres using worm over micro and chopped worm. I refed the line and re-tried the Ronnie rig and had a few Ronnie's but was getting plenty of shy touches which I knew was due to the diameter of the line being a bit heavy but I was reluctant to change incase I hooked a Carp. The two GB lines produced very little so spent the most of the match on the waggler catching the odd Skimmer to 12 oz and Ronnie's to 3 oz on singe LR. I kept trying the margin with either maggot of worm and did have two 12 oz Perch, with 30 minutes to go had a liner followed by the float going under and foul hooked a decent Carp which again was soon lost, stayed in the margin to the end and had one more liner which didn't develop.

No Carp, with my Silvers weighing 8 lb 6 oz which amazingly got me last in the Silvers payout by default, thanks to the waggler I think.

The match and the Silvers was won by Tony Rixon (pictured below with his both his net of Silvers and Carp) with 47 lb 13 oz from peg 27 which is the peg he practiced on a few days before! See his blog for further details.

Paul Barnfield was second in the Silvers just behind Tony with 18 lb 8 oz, but did lose a top-set which a small F1 pulled out due to loose fitting section.

Back to the Compton with the usual suspects and still managed to self isolate in the garden. 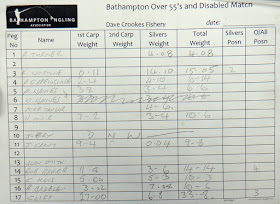 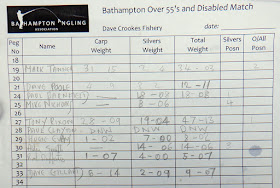