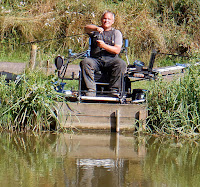 Had my usual walk around the Pool which had coloured up somewhat, probably from the recent wind and rain. Not much signs of feeding fish though, except, around pegs 18, 19, 20 and 21 – as per usual. Fancied any of these pegs plus peg 1 which was occupied by Kev Winstone – pictured – where was he after the match?.

Dave Gillard called me peg 27. Happy with this as it’s a great waggler peg. Arrived at the peg to find myself next to Paul Haines on peg 28. Dave Haines was on peg 29 one of my favourite Silvers pegs. Not to worry as I would be targeting the F1’s on the waggler and the odd stock Carp.

Firstly, I set up the Drennan 12 foot Carp waggler rod – I love this rod, wish Dad could have used it. Two Paste rigs a 0.4 gram for out in front on the top set and a 0.3 gram for the RH margin. Simple, well not quite as it would prove!

I started on the waggler with double DR hook bait over loose fed DR’s, however the wind had picked up making it impossible to fish it properly. Very disappointed when I had to abandon it. So out in front with paste over potted micro and had a run of five Skimmers and a small Tench but only one F1 – my real quarry. Meantime Paul was getting an F1 every chuck on the method feeder, but was having issues with the brambles loosing a few in the process as well as feeders. Nonetheless I was well behind with Carp and decided to try and build on the Silvers I had by setting up a short Ronnie rig for the LH bay where there was some shelter form the wind and a 4×14 Titan to fish over the paste line with GB and DR’s. The upshot was neither was producing any quality – mainly small Perch. So these were abandoned in favour a monk for the rest of the match in the RH margin with the paste. Things got emotional as I was foul hooking decent Carp and couldn’t work out why. As time progressed I started to land a few including some F1’s. With Paul now financially out of pocket by seven Method Feeders was also monking in his margins. I started to catch him up and the Carp I had just before all out did it for me – just.

The match was won by Tony Ponting (pictured with the match winner) with 66 lb 6 oz from peg 20. Tony caught mostly from both margins using corn over corn – well done matey.

The overall Silvers was won by Dave Haines with 19-08-0 from peg 29. Dave caught in his usual manner – Short to hand using either maggot or caster hook bait over some GB and loose feed. Well done matey.

I think I might know why I was foul hooking so many, but need to do an experiment in the garage to confirm or otherwise.

A few suspects missing from the pub today – just the eight. 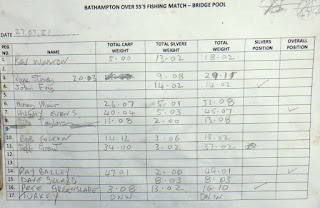 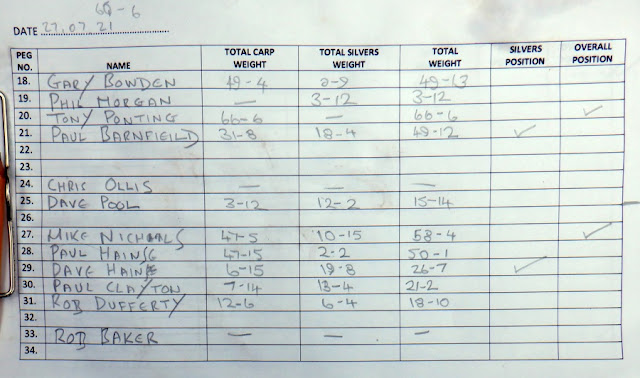