From my walk around I didn’t think it was going to fish that well. Fancied peg 1 only because the aerator was running.

Plenty of time to set up which leads to inevitable pre-all in conflab – anglers on pegs 14,15,16 and 17 pictured.

I set up two 0.3 gram paste rigs – one for out in front in 6 foot of water and one to fish to my left at three barrels of the Acolyte margin pole. The rig would also have done for the right towards the tree but would have been rig suicide. Also both the short and long Ronnie rigs for the Silvers.

I started by feeding a pot of micro out in front and started over it with the paste. This is always a good tester as to how and what is going to feed. I was expecting a couple decent Skimmers and F1’s. However, the paste was getting nibbled by small Silvers. This told me it was going to be hard, especially as the water had gone a bit clear. Meanwhile Dave Poole was catching small Silvers on his long whip. I made the decision to switch to the Silvers. Firstly, on the short Ronnie rig and later out in front on the long Ronnie rig, both with single LR over GB. I was catch small fish regularly and started to catch Dave up, both catch small Skimmers and Perch with a smattering of Ronnie’s. I thought I would have a quick look down the left with the paste rig, so fed it with micro and went in with the paste. The problem here was that there was some wind blown silver stuff on the water which reflected the sun light and no matter what float tip colour I tried I couldn’t see it very well – settled for red. There was was quite few times when I lost visibility only to see it coming back up leading to foul hookers. I did have eight F1’s and one decent Carp but got frustrated with the not being able to see the float and even though there were plenty of Carp about I gave it up to see the match out on the long Ronnie rig.

My Carp weighed 18 lb 12 oz and my Silver 17 lb 10 oz for a silvers section win. So mission accomplished.

The match was won by Andy Gard (pictured with his catch) with 62 lb 5 oz from peg 25. Andy caught mostly from his margin on pellet over pellet. Andy was helped by having an empty peg each side pegs 26 and 24!

The Silvers was won by Chris Ollis (pictured with his catch of decent Skimmers) with 28 lb 10 oz from peg 28. Chris caught on two lines at 11 metres with worm hook bait over either GB with worm feed or over potted micro.

Weights were better than I had anticipated. 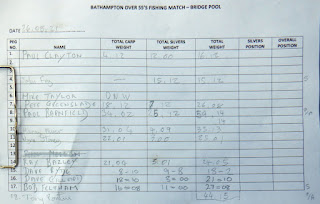 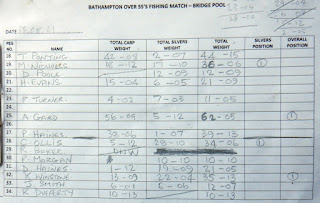