First to arrive and had my usual walk around. The water looked clear which wasn’t a good sign for the fishing. However, what struck me was the tired condition of the platforms, the wood has now significantly aged. Most have had plastic non-slip flooring covering up rotting wood. The time has come.

Good turn out of 23. Named called out and I pull myself peg 14. Happy with this one. Again I wasn’t running to the peg my trolley was pulling me down the hill 😁. For company I had Dave Poole peg 15 and Rod Dufferty peg 11.

I’ve always done well on the waggler on this peg. I got he reel and catty out and noticed the wind skimming around the corner of the island, with the forecast for the wind to increase I put it away. Set up one nude paste rig for both margins and a long and short Ronnie rig. The wind had switched around so got the reel, catty and waggler rod out again but it all went away again because a horrible swirling wind had picked up I was to regret not setting it up as a  “just in case”. 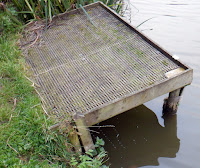 I fed the LH margin heavy with micro, the RH light with loose fed LR’s and the out in front long Ronnie rig with GB laced with DR’s. I started on this whilst I kept feeding the RH with LR’s and the LH with hard 4’s. I had six 4 oz quick skimmers (nice to see these). I fed again and appeared to kill the line. I think the an F1 or two had come over the feed. So tried the paste in the margin and was surprised to find no indications, not even from nibblers, umm. So tried the RH margin with single LR on the short rig. The arms on these platforms are very restrictive in this respect and a bloody nuisance. I started to get a Perch one a bung, nice to see some have grown on to 3 – 4 oz, still plenty of small one’s though. Very difficult to estimate your weight with such a mix of size. It suddenly stopped and subsequently I hooked a F1 which came off. I had a few do this but did land four. Once the Perch had had enough I added a Tench, a near 2 lb Perch and a couple of quality Roach to 12 oz. I then had a 4 lb Carp before the line needed a rest so tried the paste again and nothing! Water too clear for the F1’s I think. So fed some micro on the long Ronnie rig and had a 2 lb skimmer and a few more 4 oz’ers on single LR’s. The fishing became very hard and with the wind not as bad I wished I had set the waggler up, but thought about doing it but couldn’t be bothered as I thought I was too far behind to catch up not realising that it was fishing hard for everyone  Decided to scratch around with the short rig and sneaked a few more small fish and a minute before the all out hooked a decent Carp which had the adrenalin pumping, managing to land it within the 15 minutes overtime.

My silvers weighed 18 lb 8 oz which surprised me and my two carp 17 lb for a total of 35 lb 8 oz for a double bubble section and double bubble second overall for both – happy days, but must admit that I thought I was well off the pace today. I fed half pint of LR’s to catch the majority of my fish – light feeding the answer – who knows?

The Match and silvers was won by Kev Winstone (pictured with the runner up in both – a couple of double bubblers) with 50 lb 8 oz and 21 lb 10 oz of silvers. Kev caught on caster short, initially catching five big skimmers at the start before it slowed adding a mix of fish throughout the match. Kev fed three pints of caster. Well done matey.
Back to the pub with the usual suspects plus a few more including Dave Gillard’s mate Sinbad! Great end to the day.
Result: 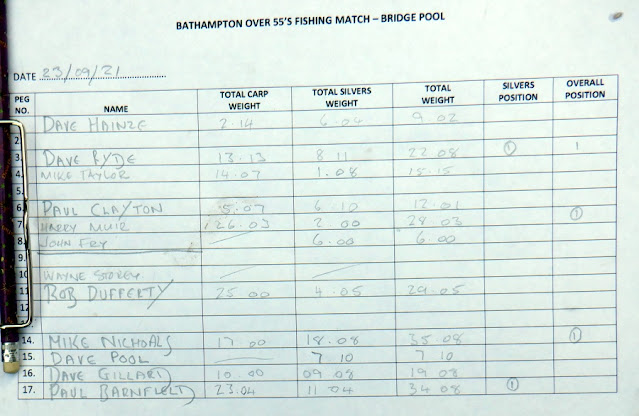 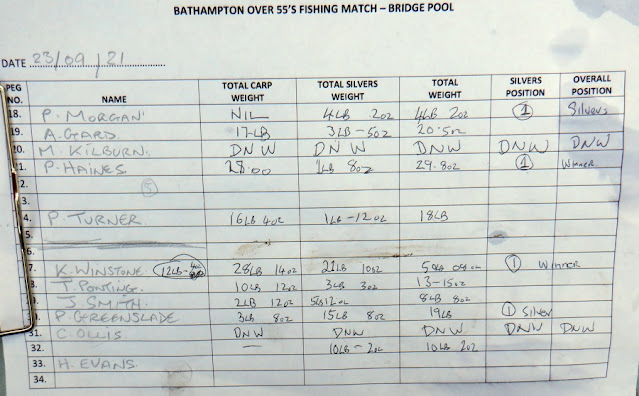