Very heavy rain throughout the night with some localised flooding. We were promised a dry breezy day carrying a chill from a North Westerly. Didn't quite get that right, we had a reasonably warm sunny day - except those pegged in the shade all day. Had my usual walk around and found that the colour had dropped out slightly so expected a hard day.

Twenty three of us today, a number which leads to difficult peg choices which can lead to some disagreement. Hopefully we won't limit the numbers until we get to over 34! Think we should give peg 13 a try out?

Second into the draw bag and out came peg 15 - very happy with this one. For company on peg 16 was Pete Turner and Paul Haines on 14.

I set up the waggler and had a few casts and thought it would work well in the conditions. Both short and long Ronnie rigs set up, in addition to a 4x16 to fish top set plus two barrels and a RJ 0.3g Slim to fish the margins.

Fed the long Ronnie rig and the two barrel lines with GB laced with micro and LP's and started to feed the RH margin with LR's. Started over the GB line with single LR and as expected started to catch "Ballers" and not much else. The Ronnie's were noticeable by their absence. I did had four small Skimmers before I had two F1's after which the line dried up. Tried the two barrel line and have one indication - didn't seem to like the GB today. I was now itching to pick up the waggler, so tried it for an hour at various depths with double LR on the hook over loose fed LR's. A bit disappointed to only catch a few small silvers whilst Paul on 14 was catching F1's regularly on the method. Presentation wasn't quite right I think, so sadly the waggler was retired. It was obviously fishing hard for both carp and especially the silvers. Picked up the short Ronnie rig with single LR on the hook over the loose feed and had a reasonable good hour catching silvers including a 1 1/2lb Skimmer and a similar sized Tench, but mostly "Ballers" - its bites. I then had a Carp about 4 lb then another of 5 lb. I switched to the heavier RJ rig with double LR's and could get a bite! So back on the short Ronnie rig with double LR's on a 18- 808 and started to catch some better carp from both margins. Kept trying the heavier rig but couldn't believe it wasn't working. I think the Ronnie rig was presenting the bait how they wanted it - following it down - perhaps. Back on the light Ronnie rig worrying it was too light for the size of fish, started to catch carp again. It then went tits up due to my crap loose feeding, and started to get "loose feeditus". Feed too long then too short then spot on only to bring the carp up in the water leading to foul hooking. Wasn't long before I lost my short Ronnie rig to a fouler - not unexpected. Sat it out on the heavier rig finally catching some better carp but the feeditus was still prevalent. I tried the worm which just got "Ballered". The carp were certainty responding to the loose fed rather than potting.

I overheard Hughie Evans say to Chris Ollis "put some more "pudding" in" an expression often used by Willy. Weeks. His fishery memorial plaque (between pegs 34 and 1) pictured above - Willy did a lot for the club in the form of "fishery management". If you know you know. Topper referred to as "The Doings".

My silvers weighed 7 lb 12 oz and my carp 53 lb 13 oz this gave me a winning total of 61 lb 9 oz and joint third overall in the silvers. Not a completely satisfying day due to the Feeditus.

It was a low weight which took the silvers by John Fry (pictured with the match winner) with 9 lb, mainly Skimmers from peg 7. A peg John knows well.

Back to the Compton with some of the usual suspects - where was birthday boy MD I ask? 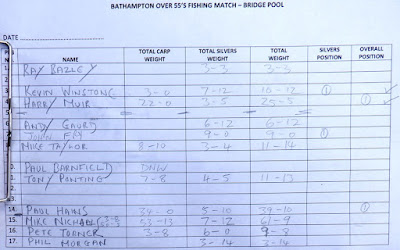 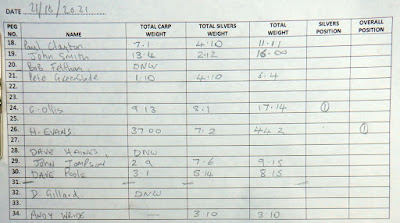