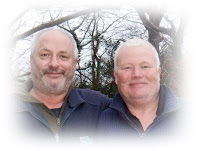 Ideal weather for fishing - over cast, mild and no wind - perfect. No time for a walk around just a stare over the bridge with the gathering - a few tiny silvers topping in pegs 18 and 17.

In to the draw bag and out comes - as Dave Haines predicted thirty ??? It was peg 31 - bugger wrong end again. However, having fished peg 33 last match I was prepared with some experience!

For company I had Pete THE GAS Greenslade on 33 and Tony Ponting on flyer peg 30.

I decided to forget skimmers and concentrate on the small silvers - Ronnie's and Rudd. So set up the waggler, the 4 metre whip with a small home made waggler and the Ronnie rig. It would only take a few minutes to set up another rig if necessary.
Started by feeding a ball of GB laced with too many LMP's (Live Mixed Pinkies) on the Ronnie rig line and catapulted some LR's over to the island. Started on the Ronnie with single RP on the hook and have three quick skimmers about 12 oz each and a 2 oz Perch. I then had a run of 1/2 to 1 oz Ronnie's. They were small so picked up the waggler with single LR on the hook and hooked and lost an 8 oz F1 followed by a 3 oz Ronnie. Although the Ronnie's were 3 x bigger on the waggler the time to catch was about the same to the keepnet as those caught short. So did an inbetweener switching to the 4 metre whip with single LR on the hook over loose hand fed same. I didn't look back catching 1 to 3 oz Ronnie's to the end of the match with only one dry spell due to a Herring Gull deciding to share my peg. Obviously the GB was attracting the smaller fish.

Only silvers to weigh which went 15 lb 3 oz for a silvers section win and a third overall lake silvers, only by a ounces - good match in this respect. Really enjoyed today - my sort of fishing. However, I was ran close in the section silvers by Tony "Smiler" Ponting on peg 30 with some nice skimmers for 15 lb.
The interesting thing, Tony fished totally different from me, catching a different species of fish with the same result and that is the attraction of commercial fisheries for me. I often walk around before the start of a match and everyone to a man has a different set ups. The commonality is having two or more keep nets in!
The match was won by Andy Gard (pictured top right with the silvers winner) with 40 lb 14 oz from peg 27. Andy caught on the waggler to the island with maggot over loose fed same catching decent carp. Later switching to the pole to catch a few F1's and skimmers.
The silvers was won Paul Barnfield with 15 lb 9 oz from peg 24. Paul caught at 13 metres on DR's over GB - single ouncing out Dave Wride on next peg 15 to his obvious disappointment.
The Pool fished reasonably well today, but needs some 2 - 3 lb junior carp stocking.
No pub today - bloody 0Covids and road blocks!
Next match is the Silvers priority and pairs on 06/01/2022 - 24 booked in - sold out.
Result:
Section A:
1. Tony Ponting 22-08-0 peg 32
Silvers: Mike Nicholls 15-04-0 peg 31
Section B:
1. Paul Barnfield 15-09-0 peg 14
Silvers: John Fry 9-12-0 peg 7
Section C:
1. Geoff Grant 22-13-0 peg 18
Silvers: Dave Wride 15-08-0 peg 15
D Section:
1. Andy Gard 40-14-0 peg 27
Silvers: John "Turkey" Thompson 13-02-0 peg 26
Weigh Sheets: 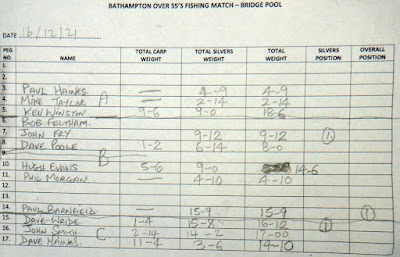 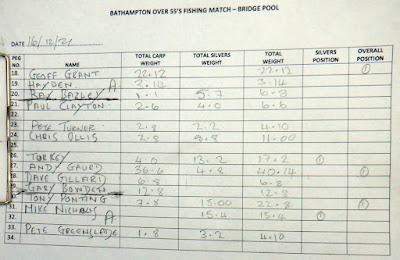