Even though the weather again was going to be cold it was one of the best turnouts for many years with 28 fishing. Because the fishing is very poor in certain areas - mainly the far end - we decided  to have 4 sections of 7 paying top overall and a Silvers in each. As it happened it was the right decision.

Nice to see Bob "MD" Feltham and his sidekick Turkey coming back to the coffin Dodgers.

I had my usual walk around - definitely going to be hard so my thinking was pegs near to car park would be best.

Dave Gillard got the draw underway and I was shouted peg 14 - happy with this as its a good waggler peg - pictured.

For company I had Mark Tanner on peg 15 and Tony Ponting peg 13.

I set up the waggler, but was disappointed to find the wind all wrong so would have to work hard at it. For the pole at two barrels where I found 7 foot was a 4x16 Winter Titan. I also set up a margin rig to fish LR's over micro and DR's.

I fed the long pole line with a large ball of GB laced with DR's. Fed the waggler line with loose LR's and the margin.

Started on the over the GB with single LR and had a few 2 - 4 oz Skimmers. This was soon disrupted by a 1 lb F1. Re-fed the laced GB and picked up the waggler and was annoyed to find lots of line under the water which I was catching (forget Bamblegate now Linegate), adding the wind made things difficult. I had a couple of F1's and then hooked a decent Carp which took an age to get in mainly due to it snagging me. Thought I had lost it so let the line slack and YES it came out - an important fish today. Tried the margin and had one tiny Perch and a Skimmer so that was abandoned in favour of the longer line I had a couple of better Skimmers which I must say were in very poor condition. As soon as the wind lapsed I would try the waggler then switch back to the pole after topping up. I had another six F1's - 3 from each line plus a 2 lb Carp on the waggler.

I weighed overall 29lb 9oz and my Silvers 9 lb. So double bubble section. My Silvers was 2nd overall and my overall weight 3rd, so good day.

The match was won by Paul Barnfield (pictured with the Silvers winner) with 51lb 8 oz from peg 24. Paul caught mostly F1's fishing long over to the island.

Bob Feltham (pictured right giving the winner a forearm smash) won the Silvers with 14lb 8oz from peg 25. His catch included a couple of the better Skimmers. Bob fished either single or double maggot hook bait. 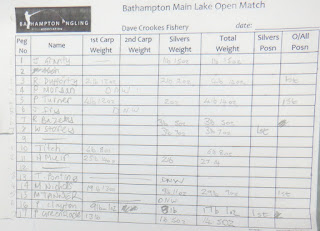 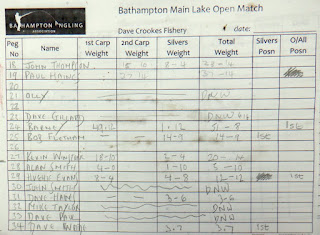