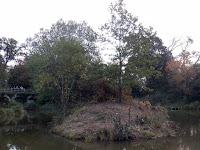 Usual walk around and I must say the club volunteers have done a great job tidying up the islands (this might see Tony Rixon back). Top picture is a view from peg 24, it makes the island look further away. The other picture is of the middle main island which now looks very pretty. The trees/bushes on pegs 17, 18 and 21 have been removed - looks like a different fishery. I fancied peg 29 for a day on the silvers.

These matches are well supported with a consistent turnout - 21 today. The weather was perfect for fishing some cloud cover and humid.

Into the draw bag and out comes peg 21 again happy with this, beginning to think I'm a draw bag. For company I had Tony peg 19 and Hughie peg 24. Tempted to set up the long pole to fish to the island, but thought I would leave it to others to see how much of the removed tree is in the water! So got out top sets from the Carp pole plus number two of the Drennan margin pole. The short and long Ronnie rigs set up, plus a RJ for the margin with either maggot or worm. The plan was to fish for silvers for half the match and F1's/Carp. So three lines - one out in front at 10 o clock using a black top in white water - this combination gives the best visibility for me where I fed GB laced with DR's. I loose fed LR's both sides for the short rig where I would also fish the RJ. Starting on the long rig I started to catch small Skimmers and Ronnie's. It's never long before the F1's bully in and soon had one in the net, creating need to refeed. Whilst the feed settled started on the short rig to the right to fish out the Perch I knew would be there. They are growing and seem only to feed for the first hour or so need to get some early low hanging fruit in the bag. Even these were being disrupted by the F1's. Caught a couple of F1's before going back on the long line where I added a few more silvers, very short lived before the need to top up, so thought I would try the short rig up in the water with loose fed maggot and after missing a fair few bites had a some decent Ronnie's to 8 oz - lovey, plus a bonus 1 lb hybrid. With about 10 lb of silvers I changed my plan and after two hours switched to fishing for the F1's earlier kindering DR's with double LR's on the hook had a great last 4 hours catching 27 F1's plus two carp losing two due to my stupidity of bullying - never learn. The left side was the most productive.

My silver weighed 9 lb 15 oz so 1 oz from my estimate. My carp and F1's weighed 47 lb 8 oz. for second overall weight of 57 lb 7 oz and a double bubble section silvers/overall. Not the highest weight but the best day's fishing this year on Bridge Pool - caught steady all match and the weather was perfect - until!

The match was won by Dave Wride with 66 lb 9 oz from peg 17. Dave caught on the pole in the water.

The silvers was wo n by Dave Haines with 18 lb from peg 11. Dave caught short with either maggot or caster. Well done to both.

I look around to see where anglers have drawn and have to say that John Smith (aka Cliff) draws some very poor pegs as he did again today, an excellent angler in the wrong pegs me thinks.

It was back to the pub with the usual suspects EXCEPT ME. Going down the road something fell off a tractor which I ran over and punctured the front near side tyre. Dave Gillard stopped to help change the wheel having got the wheel nuts off we couldn't get the wheel of the studs. We needed a mallet which we didn't have after kicking the life out of it and concerned that the car would come off the jack I called the AA and after an hour wait they sorted it for me. As it happened the AA man had fished Withy the day before. Thanks Dave. 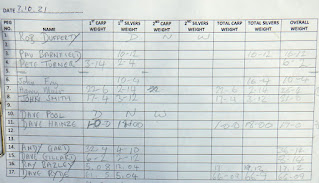 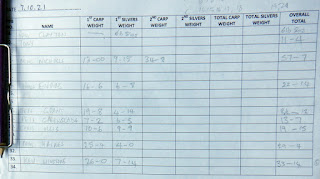