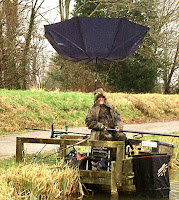 The match was to become the "day of the umbrellas". Chris Ollis Pictured with something growing out of his head!

Into the draw bag and out comes peg 6. I was happy with this until I found out that pegs 3,4,5,6,7 and 8 were in! We never put pegs 4,5 and 6 in together. Plus the wind was hacking into my peg and just felt the silvers would not be in this narrow part of the lake, any fish would be shared with Turkey on peg 5.

I initially set up four rigs and because of the conditions the 4x14 Winter Titan was the only one to be used. Started at three barrels feeding a small ball of GB laced with Pinkie with double Pinkie on the hook and had a 2 oz Ronnie first drop in. A bit of wait for the next followed by a very welcome 10 oz skimmer. The line apparently died which lead to mistake one: Instead of staying on the same line I went out to four barrels feeding again catching a Ronnie straight away. This died so mistake two:

went out to five barrels to my left and had the same effect one Ronnie and nothing else. I felt I had broken a cardinal rule by not staying over the same line especially with the fishing being so hard. It became a right struggle trying all three lines catching and loosing the odd tiny Ronnie. The wind and rain had picked up with a strong gust bending the umbrella bank stick - pictured. Now totally pissed off no umbrella and shoulders and now neck playing up mistake three: I set up the Drennan light 10 foot feeder rod and chucked that as near as I could officially get to the gap and dead water where I suspect the fish where relaxing out of my tow. With a tiny GB cage feeder filled with GB and Pinkie I hooked a decent carp which broke me! I then had two quick F1's which isn't what I wanted followed by two tiny Ronnie's. I spent the last 20 minutes back at three barrels catching a small Ronnie and again losing a few, need a ZIM number 1 me thinks! Glad to hear the all out and quickly chucking everything soaking wet into the car. 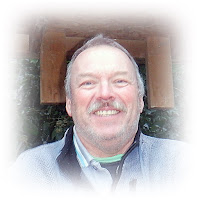 My few silvers weighed 2 lb 4 oz for last but one in the section which was tight except for Paul Clayton on peg 7. Think I could have done much better had I stuck to the one line. Well done to my partner though. My two F1's weighed 2 lb 9 oz.

The silvers was won by Tony Rixon (pictured right - bugger would stop laughing) with 12 lb 1 oz from peg 15. Tony caught long and short with caster and GB - see his blog for in-depth details.

Now for the Umbrella carnage:

Dave Haines: Umbrella top blew Mary Poppins like over to the main lake.

Kev Winstone: His new Umbrella is now in peg 27.

No pub for me, rushed home for a very hot bath. Now out to the garage to dry the stuff out.

Pairs Result to date: Note the weigh sheets were hard to read so weights subject to confirmation: Drop one result: No shows get 6 points - equivalent to last in section

Weigh Sheets: Only posted for prosperity!! 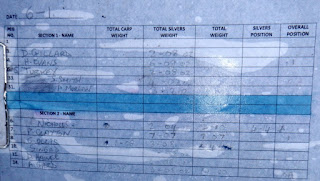 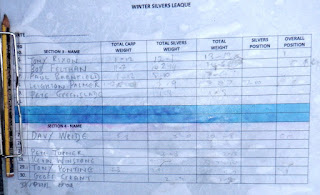