Twenty five fishing today with no short walkers - pictured right. It's a privilege to fish with these guys - 1,000 years of experience lined up. All very good anglers having served apprenticeships on various types of fisheries over those years. Worth a few bob too.

Second into the draw bag and out comes peg 33. This is where the small fish tend to shoal in winter, but with pegs 34 Hughie and peg 32 Pete in it was going to be hard. This section is split across the lake two my side and three the other. The light on my side is awful due to the trees opposite still with their yellow ochre leaves and the sun high above behind us. Arrived at the peg which is a bit of parrot cage making fishing running lines difficult. However, I set up allsorts to help pass the time if it was hard including a feeder rod with a tiny cage feeder.

Due to the light I started short really hoping I could catch small fish for most of the day. I fed some GB laced with LP's and fished single LTR over the top. The expectation was to get a bite first put in, this didn't happen and after 30 minutes and one small Perch. I tried the cage feeder with GB and Pinkies which had to be under armed. After a short wait and no indications I wound in to find a small Rudd attached. Another cast and the same. The fish were so small they couldn't pull the line and tip. This was abandoned in favour of the 4 metre whip with a small waggler fished over loose fed LR's with single on the hook. I had a good run of very small fish averaging 1 1/2 ounces for about an hour before they shied away probably due to the sun brightening. I fed some GB over the line hoping for their return. First try I had a 12 oz Skimmer followed by - nothing. The only way left was to pick up the waggler which was going to be difficult to use due to the tree behind and the light. However, after a few side swipe casts I was able to hit some narrow dark water where I could see the red top waggler. I fished single LR over loose fed same. I had a steady last two hours catching tiny Rudd and and Ronnie's. I only caught the tree twice. This end of the lake doesn't see the sun all day in winter with frost still on the ground from two days ago, so glad to hear the pea less whistle for the all out.

My 70 odd fish weighed 6 lb 4 oz for section silvers. The section fished really hard except for peg 3 on the opposite bank. However, I thought compared with other fisheries at the moment it fished reasonably well overall.

The match was won by John Smith (pictured with the silvers winner) with 39 lb 10 oz from peg 30. John started on the straight lead with bread hook bait over to the island catching four carp for about 20 lb. He then switched to fish caster over potted caster at 13 metres adding a few skimmers and F1's. Well done mate well fished. 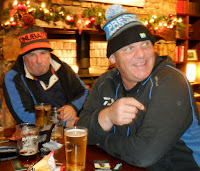 The silvers was won by Paul Barnfield with 13 lb 4 oz from peg 3. Paul caught at 13 metres over a few different lines fishing Pinkie over GB laced with dead Pinkie. Well done matey and not too many moaned on!

Back to the Compton for a warm and a pint with a good turn out - "We're going to need a bigger pub". A couple of the lads sporting the new look winter fishing bobble hats - one size fits nobody.

NOTE FOR DIARY: The Silvers priority matches start 06/01/2022. It will include a pairs match. Twenty four booked in. 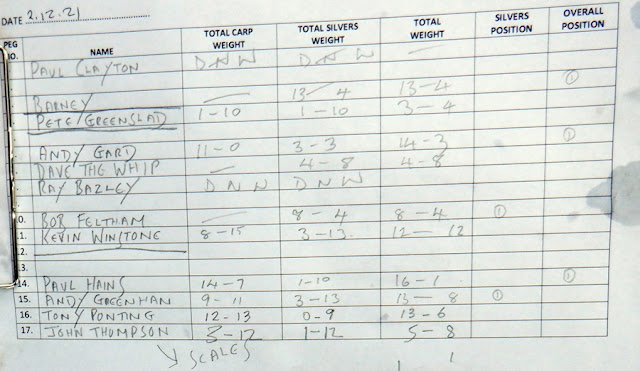 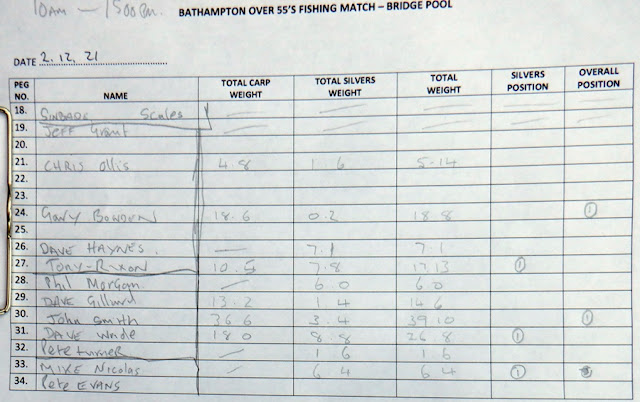