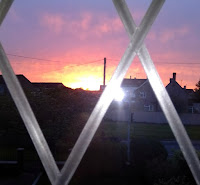 5 am checked the weather and saw the eastern sky (pictured) - "Red sky in morning shepherds warning" - how true - Gale force winds, rain on and off and bloody cold for the time of year was to follow throughout the day. Far too windy for umbrellas.

Arrived a bit later than usual so didn't bother with the usual walk around. Twenty one fishing which was good considering the weather forecast, also probably because BAA have stopped the stupid mid match weigh ins which was putting anglers off going. Dave called me peg 29. This peg is a good Silvers peg so would do me sir.

Found myself next to Granty on peg 28 (again), always good fun to be with  especially in the pub with his story telling with Cliff.

Plenty of feeders being set up as no one would be fishing long pole. I set up three rigs the first a margin paste rig which was to sit in the holster getting wet all day. A 4x13 Martin Rayet (MR) float to fish top-set plus one barrel, but did have another barrel in the holster incase. Finally the Ronnie rig which I thought might not present well enough in the conditions.

The wind on this venue tends to continually change direction from minute by minute, but the main thrust was from the SE, which put the tow from left to right , however, the float would be going the other way so feeding the GB laced with DR's was fed up tow. Started on the MR with single LR on the hook and soon had my first tiny Perch on many, which tend to feed for about an hour before switching off completely. I had a run of F1's including a small Koi (where did that come from). As soon as the wind abated I picked up the Ronnie rig which worked better than I thought and accounted for a couple of big Ronnie Roach and Skimmers. As soon as the wind picked up I switched back to the MR. So by switching between the two rigs more or less kept Silvers coming throughout the match, interrupted by the occasional accidental F1 and one decent Carp. 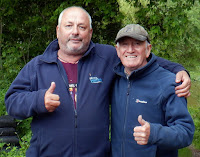 My Silvers weighed 19lb 4oz for top silvers on the day. My Carp weighed 18lb 10oz for 4th overall. If it wasn't for the bloody weather I would have thoroughly enjoyed the match.

The match was won by Paul Barnfield (pictured with the Silvers winner) with 62lb 12oz from peg 4. Paul caught on worm over micro feed at 10 metres, nice to have the ballast to fish that long in todays conditions. Well done matey.

Now to dry out all the kit ready for another soaking Sunday at Westerleigh. 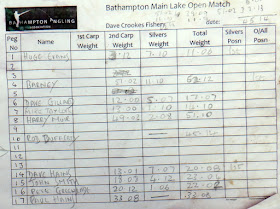 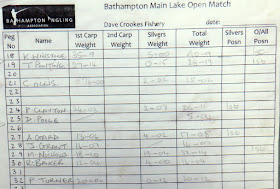